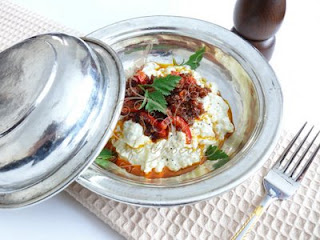 
Place the ground meat and margarine in a saucepan and simmer on low heat with lid closed for 20-25 minutes until all the juice is reduced. Add 1 teaspoon salt and the other spices, stir. Wash and dry the eggplants, barbecue on the burner, turning frequently. Peel off the skin, cut off the stems and chop finely. Sautè the chopped eggplants in 2 tablespoons of oil for 2-3 minutes. Peel the garlic, wash and mince. Add the garlic, yogurt and the remaining salt to the eggplants and mix them throughly. Remove it to a serving plate and spread evenly. Pour the hot minced meat over the eggplants. Wash the green peppers, remove the stems and chop them 2-3 millimeters thick and sprinkle over the dish. 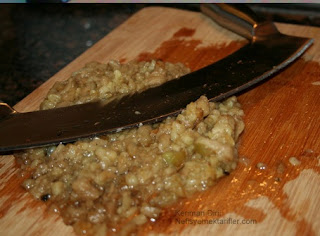 Nutritional Value (in approximately one serving) : 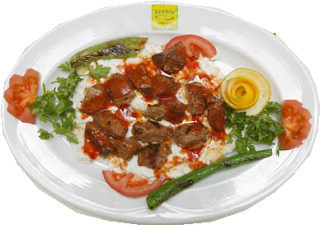 Notes : It is one of the popular summer dishes of Gaziantep which is served at lunch or dinner as a single course with side servings of hot green peppers. 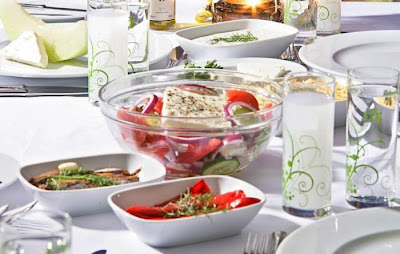 When one thinks of Turkey or Turks, one is reminded of Raki. Although it is not known where or when this drink was invented, it is certain that the history of raki does not go as far back as wine or beer. There are many proverbs on raki which is the traditional Turkish drink. Raki is made from different fruits in different regions, but grapes, figs and plums are the main ones. 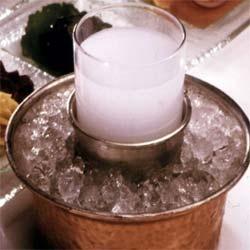 In the Near and Middle East countries the drink is known by different names such as Araka, Araki, Ariki which obviously come from the same origin. Some claim that it is called Iraqi (from Iraq) because it was first made in this country and spread to other regions. Others say it got its name from the razaki grapes used in producing it. Both theories are acceptable. Another theory is that arak in Arabic means "sweat" and araki " that which makes one sweat." If one drinks too much raki one does sweat and when raki is being distilled it falls drop by drop like sweat, so the name could have come from Arabic. In neighboring countries different kinds of raki have different names. In Greece gum is added to it and the drink is called "Mastika". Duziko which comes from the slavic word "Duz" means raki with aniseed. In Turkey, raki made from grape residue used to be called Düz Raki or Hay Raki. Zahle raki has taken this name because it is made in the city of Zahle in Lebanon. Raki is not a fermentation drink like wine and beer but a distillation drink, so more technical knowledge and equipment are necessary for its production. Encyclopedias write that in "Eastern India a drink produced by distilling fermented sugar cane juice is called "arak" and the same name is given Ceylon and Malesia to an alcoholic drink made by the distillation of the juice of the palm tree. It is also noted that in Iran the drink made in the same way from grapes and dates is also called "arak". 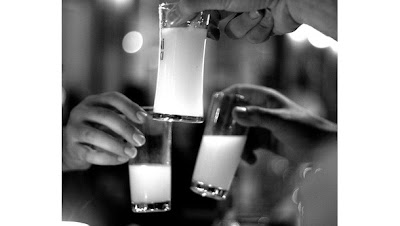 The history is going back 300 years. The art of distillation which started in the Arab world and spread to the neighboring countries was implemented when people thought of making use of the sugar in the residue of wine processing. With the addition of aniseed, raki took on its Turkish characteristic. The famous Turkish traveler Evliya Celebi listed the artisans of Istanbul in the first volume of his book on his voyages which he wrote in 1630. Among the artisans he also mentioned the arak makers. While writing that arak was made from all kinds of plants, he also mentioned the word raki and said that drinking even one drop of this intoxicating drink was sinful. It is known that at that time in Istanbul 300 people in 100 workshop were occupied in the production and sale of this drink. Evliya Celebi spoke of tavern-keepers as "accursed, ill omened, blame worthy" and said there were taverns all over Istanbul but especially in Samatya, Kumkapi, Balikpazari, Unkapani, Fener, Balat (last three are on the Golden Horn) and the two shores of the Bosphorus and added "Galata means Taverns". Evliya Celebi recorded the small wine shops and the kinds of wine they sold and also mentioned the taverns that sold raki, all kinds of raki, like raki wine, banana raki, mustard raki, linden raki, cinnamon raki, clove raki, pomegranate raki, hay raki, aniseed raki, etc.

Raki was first produced from the residue of grapes left over from wine making. When a shortage of residue started, spirits from abroad were imported and processed with aniseed. This went on till the First World War when, for want of raw materials raisins were used in the production of raki and sometimes even dried figs and mulberries. For good quality raki, seedless raisins and aniseed in Cesme were preferred. As the raki industry developed, aniseed agriculture grew and developed with it. When alcoholic beverages were prohibited at one time, underhand producers lost no time in taking steps. The administrative authorities, especially in small towns, turned a blind eye to the illegal production of raki so long as it was made in accordance with the technical rules. In many houses meat grinders were used for mincing the raisin, large basins formerly used for daily washing were now used for fermenting the grapes and oil cans were converted into distilling apparatus. The raki which was usually without aniseed and which often contained materials harmful to health were distributed to by children, in the evenings, when the streets were no longer crowded. 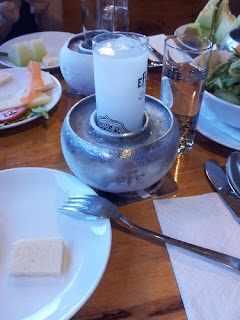 Drinking raki has its own traditional rituals. Most important is what it is to be partaken with. White cheese is the main and unchangeable "meze" of raki. Raki is usually drunk with cold dishes like tomatoes, cucumber, lettuce and seafood. Fish is also a favorite, especially mullet and mackerel. Due to the aniseed it contains, raki changes color and becomes a milky white when water is added and a glass of pure water to go with it gives a distinct pleasant taste.

The favorite mezes of raki drinkers, roasted chickpeas and freshly salted almonds, can be found in almost all taverns. 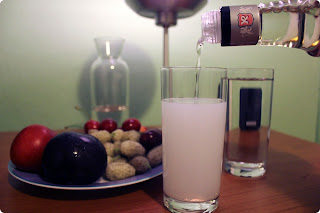 Those who have been drinkers of raki for years and years, point out that this drink affects one according to his/hers mood. Sometimes one is tipsy after a glass or two; while sometimes even a huge bottle gives only a feeling of well being and enjoyment.


We wish you healthy and beautiful holidays!
We invite you to follow us on our facebook page
http://www.facebook.com/libertyhotelsoludeniz where we publish photo's , video's and news about Liberty Hotels Oludeniz (Asena Beach).

Liberty Hotel Ölüdeniz
Liberty Hotels Oludeniz is the most memorable hotel when Oludeniz comes to mind, with it’s comfort, high service standarts. And it is one of the most popular one, a trademark with all the qualities you would expect from a vacation. Liberty Hotels Oludeniz is an esssential foundation that has the philosophy of offering the high quality service, products and hospitality. We, Liberty Hotels Oludeniz team, have an ever-growing vision, considering you, our guests as a part of our family, try to give you the best service, capture attention with new exclusive attractions. Which is why, most of our guests are happy to prefer us for years. You will too, be happy being part of “Liberty Hotels” family. You can become our fan on Facebook www.facebook.com/libertyhotelsoludeniz With a click on the like button on top of the page on Facebook www.facebook.com/libertyhotelsoludeniz you get our updates from time to time with video’s, photos and promotions.